M. Isidora Forrest’s Isis Magic truly is a treasure trove of a book, providing a well-mapped path on this journey. After reading through the initial 10 chapters, the actual work of becoming a priestess of Isis has begun. 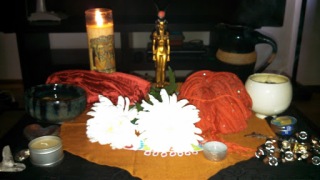 On August 6th, T and I had our first ritual taken from Isis Magic and slightly adapted to include multiple participants. There were components of the rite that were completely new to me and that felt weird (not casting or calling quarters? wha…?), but only because they differed from what I’ve been doing for the past 20 years. Frankly, had I ever performed an ADF ritual with someone else – honestly, even gotten past the Two Powers Meditation – I imagine it would have been similarly different. And really, the set up made sense for what we were doing. A circle and quarter calls make sense for alchemical or magickal ritual, but this was really a ritual of dedication to exploring with Isis, so a circle was unnecessary, even restrictive.

“This is the ritual that begins a Votary’s relationship with Isis. During the course of the rite… you will vow yourself to Isis for a period of time… With this holy vow, you become devoted to Isis for that specific period.
The key symbol … is the Knot of Isis, the Tiet… the magical, protective, and sacred Knot that is a special emblem of the Goddess. As a knot joins two things, this ritual of Tying the Knot of Isis joins the Votary to the Goddess for the specified period. The Votary gives to the goddess her… devotion, attention and energy; in turn, the Goddess gives to the Votary Her protection, communion, and as always, Her Divine Love.” (Isis Magic, p. 263)

I have no idea, for the record, if this is actually where the phrase “tying the knot” originated. Seems unlikely, though I do appreciate the symbolism.

For me, there were some particularly powerful points in the ritual. The first was working with someone who felt as deep a devotion to a deity as I do – and who approaches that devotion in a similar way. We have studied together – and T has been studying Isis longer than I – and the melding of mind and spirit in ritual is something we do well together. I look forward to deepening this connection through the Votary work on my own, and then connecting again with T for further ritual. Standing in shared knowledge gleaned from historical resource and gnosis is deeply moving for me.

We spoke vows to the desires of the heart (in connecting to Isis), strength of spirit and the mystery of the soul. Speaking these in community is weighty – I have done this once before with Brighid. I find my heart racing, my hands shaking, but my voice is strong and sure. Sharing this with T wove a really beautiful web of distinct but connected intention. You can see the tokens of heart, spirit and soul nestled in the center of the Tiet – mine are on the left.

The last thing that I want to touch on was in our meditation on Isis – this came after vows and the knot. I have had connections with Isis before and they generally include her winged form. During this time of deep prayer, I felt a warm and close sense of being enfolded in dark wings, and a surprisingly sexual, yet protective, connection with Isis.

Post ritual, I reconstructed my personal Isis shrine, including the knot and tokens. I’m looking forward to this journey. I have several meditations and rites ahead of me. I have had a sense of the direction of my priestesshood with Isis – in helping first myself, then others to calling back the pieces of Self. The delicate balance of this, the Work of it, is in doing this while maintaining healthy boundaries. For now, I’m focused on myself. I will see where the path takes me as the journey unfolds.

This site uses Akismet to reduce spam. Learn how your comment data is processed.